Inertia: Where do you need to give yourself a push? 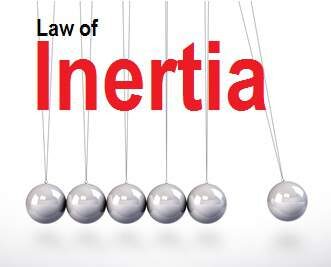 Things tend to stay as they are. They don’t change unless something or someone changes them and it’s a law, the law of inertia. Galileo expressed it. Newton refined it. Everything that is moving tends to keep moving the same way unless some external force is applied. Things that are not moving tend to want to stay that way too.

People are like that. Once we get going in a certain direction the tendency is to keep going. That can be good if you’re going the right way. Not so good when your direction is off. People ask themselves “Why did I stay in that relationship for so long?” or “Why didn’t I find a better job before now?” Others find themselves stalled or stuck and cannot seem to get moving in any direction. It might be inertia.

It takes energy to change. That was Newton’s second law of motion. The amount of energy needed to make a change is equal to the size of whatever is being changed and its speed. (Force = mass x acceleration)

Personal change takes energy, and personal energy is not limitless. Experiments that test for will-power have shown that personal strength seems to rely on some kind of inner energy and it can be depleted. People who have been asked to sit and watch one television while ignoring another have less self-control in a subsequent exercise than those who did not have to focus in a prior exercise. Scientists got the same results when testing with cookies and beer. The energy required for both initiative and resistance seems to come from the same source and when the strength for one is gone, so is strength for the other.

Though it may not be obvious, you have to take friction into account. Give your chair a push and the friction of the floor will slow it. Air consumes energy exponentially when one travels with increasing speed. Some things in life will grip you as tightly as muck up to your thighs. You might have to lose your boots before you get out of that mess. Where is friction slowing you down or holding you back? What, or who, brings friction to your life?

With the accumulation of size, scope, or history it gets harder to change. “We’ve always done it that way” may not be a good reason to keep on in the same vein but it is a fair explanation for why things often are as they are. It would take more energy to move the moon out of its orbit than to move a marble across the kitchen floor. Some think the tilt of the earth’s axis was caused by a collision billions of years ago with an object as big as the planet Mars. It that’s so, it caused the change of seasons everyone on either side of the equator experiences. It can take a lot of energy to make a very big change, or even to make a small change in something that is very big.

We ourselves are not the only ones who make changes in our own lives. In the intersections of life people are regularly T-boned when someone or other, maybe even us, misses a signal to stop. Other times people or circumstances merge to nudge us in a new direction.

Newton’s third law of motion says that for every action there is an equal and opposite reaction.

I bought my first four wheel drive truck when I was a young man. I pulled off from the Trans-Canada highway and poised the front bumper near a bank that dropped 8 or 10 feet before leveling off again. I had not planned to but I put the truck in gear and dropped the nose over the slope. In less than a minute the front bumper was pressed into the bog at the bottom of the little hill and the back bumper was hung up on the gravel bank. All four wheels spun the air and none of their energy was transmitted to the ground. For the next two hours I jacked and jostled the truck to freedom. When I was done I scraped bear scat from the heels of my boots and washed the sweat off. It took a lot of energy to get unstuck, mostly mine.

To practically apply Newton’s third law, if you’re going to push for change, you need something solid to push from. Archimedes predated Newton by 2000 years but he understood the principle and took it a step further when he said “Give me a lever long enough and a fulcrum on which to place it, and I shall move the world.” If you leverage your influence you can make changes far beyond your own size or strength. Parents do this when they know what motivates their children. Politicians propel change when they understand what is important to their constituents. Tyrants rely on fear. Leaders leverage the power of hope. One needs not only strength, but a solid place to apply it from to bring about change. Where is your solid place?

Flames bellowed from beneath a Saturn 5 rocket on July 16th 1969 as Apollo 11 lifted from the launch pad. After orbiting the earth one and a half times an S-IVB third stage rocket blazed in the airless environment and propelled the combined lunar/command module on its trajectory toward the moon. The craft would travel almost 250,000 miles from the energy of that one big push.

Sometimes, we are our own solid place and it is the energy within that overcomes one inertia and creates another in a new direction. Where do you need to give yourself a push?