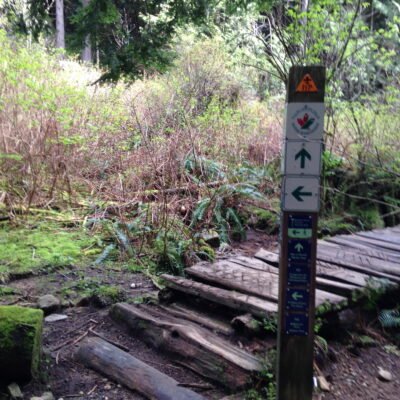 The directions said go left, we went right. The hike was a loop either way, but from the map I thought going right would take us up the steepest section first. Ten minutes along the trail we struggled to make sense of the written directions in the guidebook. The book mentioned the remnants of an old logging railway, and we saw that, but the trail veered right when the directions said to go straight ahead. We should have heard the creek by now, but couldn’t.

“These directions aren’t very good,” I said and looked again at the map and terrain and tried to integrate it all.

We passed sign posts to Blue Gentian and Lost Lakes and followed the directions to turn right after crossing the bridge over Upper Brother’s Creek. We walked another five minutes before realizing we were moving farther from the waterfalls we had come to see. After asking other hikers for input we retraced our steps to the bridge and realized our mistake. We had read the directions backwards. Right trail, wrong way. Right directions, wrong direction. Now it all made sense, real sense, not the forced interpretations we had used to convince ourselves we knew the way. Just because there were similarities (like an old railway bed that crossed the trail more than once) didn’t mean we were going the right direction. Of course we could have read the directions backwards, but the hike would have been better in the direction the guidebook suggested.

When the map you’re using for life isn’t accurate (be it vocational, relational, psychological or spiritual), or when you’re forcing the directions to fit your circumstances: the directions could be wrong, or maybe you’re just going the wrong way. Re-orient yourself, and turn around.