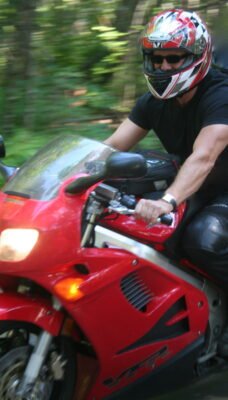 I almost hurt myself in an S-curve on 8th Avenue that curls up through a ravine just east of 192nd Street. It is the best set of corners for ten kilometers in any direction.

I had ridden cruisers on that road before, Yamahas and Harley’s that rolled at their own pace with no hurry to be had in them. But this day I was on a sport-bike. It had more power, better brakes and a riding position that begged for corners.

It was my third time through. Quicker than the second which had been faster than the first. Coming into the final bend I looked at the three feet of gravel that shouldered the pavement and dropped over the bank into a ravine. If I rolled onto that loose rock I was going too fast to make the corner. The closer I got the more I concentrated on that shoulder. I wasn’t just facing my fear, I was fixating on it. I took my foot off the inside peg and fish-tailed until I regained the sanity of the pavement.

I have taken tighter corners faster. I road the big sweeper before the railway tracks from Pemberton to Whistler fast enough to scrape the edge of my boot on the asphalt as I leaned into the turn. I was not afraid. I was focused on where I wanted to go instead of the places where I did not want to go. You still see other things when you are focused, a rock or loose sand in the middle of the lane, an oncoming car that is turning in front of you, but they are peripheral to the way ahead.

This is easier to write or read about than it is to do. When something that has the power to hurt or destroy you comes into your field of vision, your emotions are drawn to it like iron filings to a magnet. One chooses a different path with the eyes, though the heart may still be on a different part of the road.

I went back through the corner on Eighth Avenue. This time I looked up through the corner to where I wanted to go. I rolled the throttle off, squeezed the brake and leaned into the curve before rolling the gas on again from the apex out. The bike stood back up as I exited the corner.

The right focus can be all the difference between happiness and hurt, success and disaster.

As a leader, a spouse, a parent or a colleague, what are you looking at that sets the direction?

Where do you want to go?