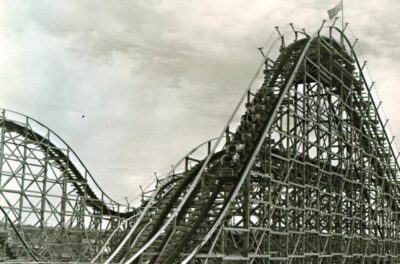 I did not like roller coasters. At the PNE in 1969 I watched my little sister ride up the giant wooden trestles and plummet over the first peak with our grandfather beside her. After the ride Grampa held her shoulder as they walked toward us.

My sister had snapped her head back going over the first rise and knocked herself unconscious. She couldn’t remember a thing until the ride was over.

A few years later our family went to Disneyland. As we walked around the Matterhorn I studied its twists and turns. I was okay as long as I could see the next event. My confidence built to the point that Space Mountain didn’t seem like such a bad idea and at sixteen I could not say no without looking like a wiener.

The darkness got me. You never knew what was coming next. Up, down, left right, accelerate, decelerate, who knew? My stomach kept churning after we left the building.

Our family had twisted and turned too. My dad had left his job in Kelowna and moved to Kamloops. I stayed behind to finish my last year of high school.

“Unmet expectations are the source of all conflict.” That’s what my dad said after leaving a job where conflict became an art form.

“If there is conflict you can be sure that someone is not getting what they want. If a person expects what you’ve got, power, possessions, affection or control, and you don’t give it to them there will be conflict.”

I overheard my dad on the phone in those days.

“I want us to better friends at the end of this meeting than we were at the beginning.”

He wouldn’t tell me but after the meeting he told me how he handled it.

“You heard me affirm the relationship before we started” he said. “When we met I said the same thing again and then I asked him what he expected of me. I listened, and then I told him what I expected.”

“No, but at least we understood each other. After that you can always say yes, or no, or is there some way to adjust our expectations?”

Many expectations are negotiable. Not all should be.

Long ago Aesop told the fable of an older man who made the journey to market with his wares, his son, and his donkey. After some time on the road the father could see the son was tired and said “Why don’t you ride on the donkey and I will carry the wares.” The son was thankful and did what his father suggested but before long another traveler passed them and chided the son for making the father walk and carry all the goods while the son rode the donkey. “You lazy boy!”

The father and son had gone quite a way and stopped for a drink of water when one more passerby asked how they could be so cruel as to make the donkey carry all of their wares while they carried nothing. It did seem unfair so the boy and his father cut a stout pole from the forest and brought it back to the road where the donkey waited. They tied the donkey’s legs together, threaded the pole between them and hoisted the donkey to their shoulders. They only got as far as the middle of the bridge when the knot holding the donkey’s back legs came loose and he flailed and thrashed until he fell over the edge of the bridge into the water and drowned.

If you do whatever everyone else wants you will be left with nothing.

Some years ago I led a team of volunteers that was not functioning with the same energy it used to have. There was less enthusiasm about preparation and their execution was less than inspiring. Every person on the team had great strengths and good values. I suspected it had something to do with expectations. So I got them together. I started by reminding them of the vision and values we lived by, what we were trying to do and why it was important. Then I invited them into the process.

“I want each of you to tell the rest of the group what they can expect of you.”

We went around the circle and one woman told of how she could bring creativity and enthusiasm to the project, but when she had to deal with administrative details it just wore her down. One of the men said he like working to keep the team running smoothly and making sure all the team members had what they needed personally to succeed. Another commented that he brought a drive for excellence. He wanted them to do their best every time. After everyone shared what they were willing to contribute, we went around the circle again.  Focusing on one chair at a time everyone told the person sitting there what they expected of them. It was freeing to see how people’s expectations and offerings lined up. The team had everything it needed and individuals were energized by doing what they did best.

Compatibility isn’t about being the same. Unhealthy competition is often the result of people trying to be the same. Compatibility is about bringing something unique to others in the context of shared goals and values.

So how do you find your fit?

Communicate, make sure each knows what the other expects.

Consider, is this something I am willing to do for this person?

Adjust your behavior, your expectations or your relationship.

If you are an employer and your employee is unwilling to do what is needed and what you have clearly communicated, its time for a change. If you are a colleague or friend, you will need to make adjustments as life changes around you. If you are a parent, control is exchanged for persuasion in the pursuit of self-control for our children.

I was back in Anaheim again years later. The Matterhorn was closed. I was disappointed. I did go on the new coaster that eclipsed every ride around it and sat in the last row. We launched from ground level and snapped over the top of every rise as the cars in the lead dropped. We flew around bends and soared through the loop. I looked over to be sure the boy beside me was okay and realized I wasn’t concerned for myself anymore. It was fun. That happens when you don’t always have to be in control and you enjoy the company of those you’re on the ride with.